Photos and descriptions of a variety of our banners follows, with close-ups of sections for the sewing, quilting, appliqueing viewers. 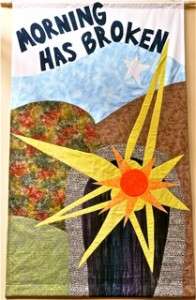 “Very early on the first day of the week, they went to the tomb when the sun had risen.” (Mark 16:2)

This Easter banner has had many willing hands working on it to see it come to fruition.  Marie Allen, Nora Berkhout, Jeanne Chambers, Barb Hollingshead, Betty Karpuk  Doreen Lister, Heather Mewhort, and  Marcia Skaarup all contributed time, energy, fabric, ideas, supplies, and support for this banner.  It must be noted that Marcia Skaarup did all of the actual sewing—hours and hours of it.

The original pattern came from a book, Banner Designs for Celebrating Christians, by Jane Debord and Linda Isbell—many thanks to them for their inspiring pattern.

Thanks, also, to the Chrysalis Fund for funding this project.

May this banner be enjoyed at Kamloops United Church for many years to come!

Banner of the United Church of Canada Crest

the official signature of The United Church of Canada, placed on legal documents, ordination and commissioning certificates, and licences to perform the sacraments. Designed by the Rev. Dr. Victor T. Mooney (a treasurer of the United Church), it was officially adopted in 1944 by the 11th General Council.  For our church members, this insignia is a spiritual and historic reminder. Its oval shape is derived from the outline of a fish, a symbol of identity by early Christians. The initials of the words “Jesus Christ, Son of God, Saviour” spell the Greek word for fish.  The crest is designed in the form of a St. Andrew’s Cross with an insignia in each of the four corners. The “X” at the centre, the first letter of the Greek word for Christ, is a traditional symbol for Christ. In the four corners of the crest are symbols, three of which are particularly associated with the three communions—Congregational, Methodist, and Presbyterian—that united to form The United Church of Canada in 1925.

Note:  The 41st General Council for the United Church of Canada voted (August 2012) to include aboriginal elements in its crest and references in its official documents acknowledging the history and territory on which the church was founded.

The open Bible represents the Congregational Churches with their emphasis upon God’s truth that makes people free. From this communion we have a heritage of liberty in prophesying, love of spiritual freedom, awareness of the creative power of the Holy Spirit, and clear witness for civic justice.

The symbols alpha and omega in the lower quarter are the first and last letters of the Greek alphabet. 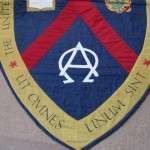 They symbolize the eternal living God, in the fullness of creation (Revelation 1:8).              The Latin words ut omnes unum sint that surround the symbols on the crest mean That all may be one and are taken from John 17:21. They are a reminder that we are both a “united” and “uniting” church.

In 1980, a French translation of The United Church of Canada—L’Église Unie du Canada—was authorized by General Council to be added to the crest.

The United Church of Canada Crest Banner that hangs at KUC was created by Lesley Robinson for the congregation of Kamloops United Church. 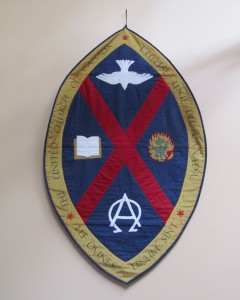 This KUC Advent banner was made by Carolyn Ramsay. 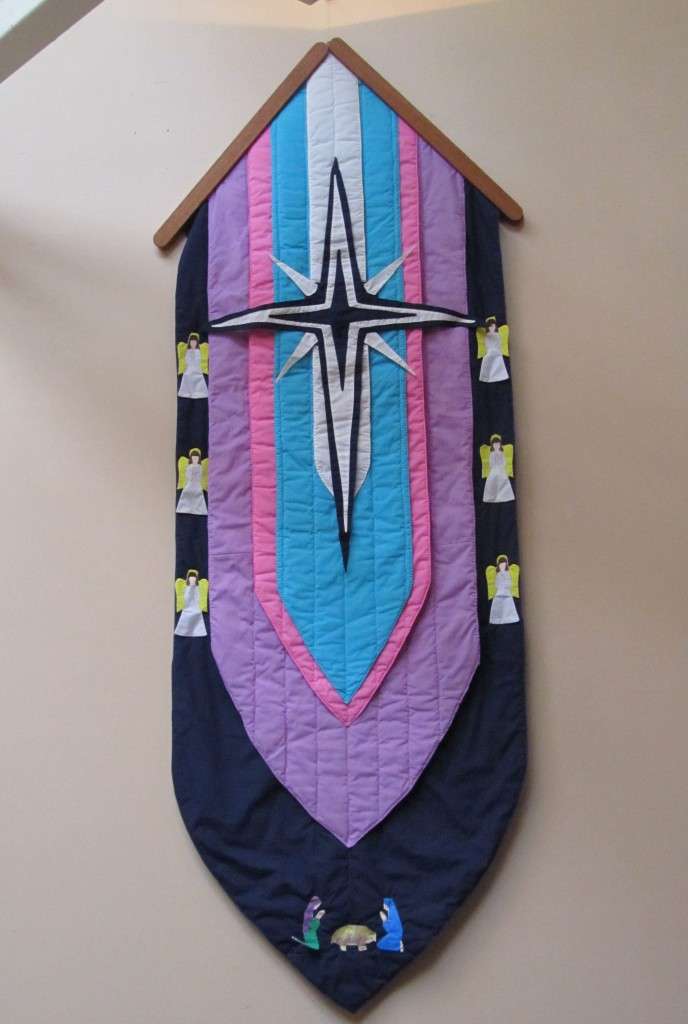 Carolyn made this Advent banner in four layers, so that, in this season of waiting, we would wait to add another layer or pieces on each of the Sundays of Advent, beginning with a deep purple larger layer.
On the first Sunday of Advent the deep purple hangs “empty”.  On the second Sunday of Advent the light purple is added.  On the third Sunday the pink layer is added.  On the fourth Sunday, the pastel blue.  On either the fourth Sunday of Advent, or on Christmas Eve or Christmas Sunday (depending on the calendar) the star, angels and nativity are added. 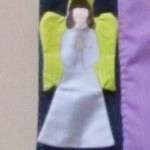 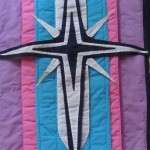 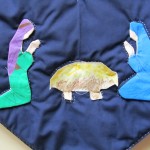 The layered Advent banner measures 7feet 11 inches at the longest point.
It’s width is 33 1/2 inches of fabric and 37 inches at widest part of its beautiful wood frame. 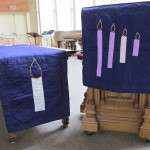 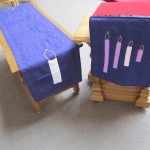 The table runner is 7 feet 10 inches long.  The antependium is about 21 inches wide and 22 long. 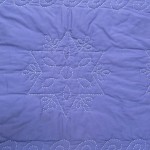 KUC also has a “Joy” banner with the flame of the Joy Advent Candle. 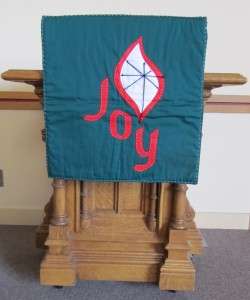 The nativity scene antependium (pulpit hanging) was created by Lesley Robinson in 2003. 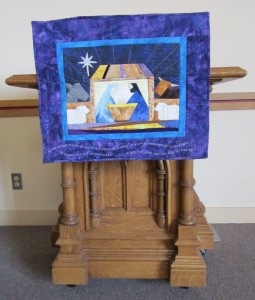 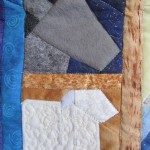 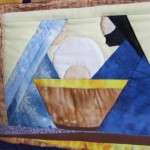 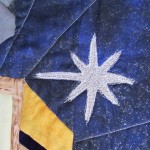 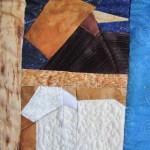 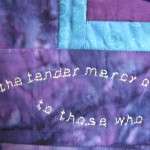 The “light flash” representing Epiphany
was designed by Marcia Skaarup and Gerry Nicholson,
and sewn by Marcia. 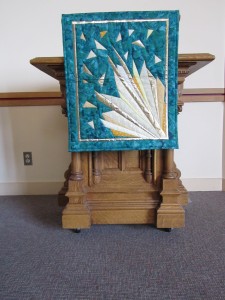 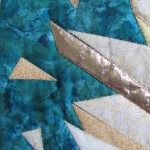 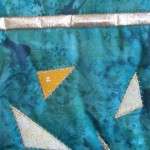 The epiphany antependium is
about 22 inches long and 21 inches wide.

The epiphany season follows the Christmas season, and this antependium is hung in early January. 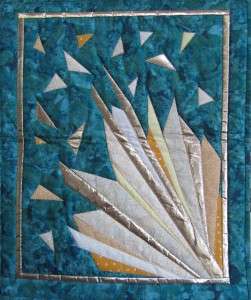 Untitled Banner and Antependium for the Season after Epiphany 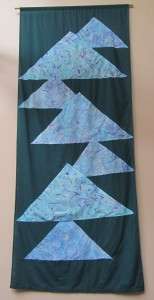 This banner was designed and created by Mona Banek, and quilted by Mona’s sister Gail.

The ideas behind the banner:
– Spirituality and Ecologically based justice
– Triangles are placed in threes to represent the Trinity
–  Each of the triangles interlock to represent unity
–  They also represent mountains, earth, islands in an ecological sense

The triangles were marbled by Mona, by hand, using the monoprint process.
The banner is 7 feet 9 inches long/tall and 3 feet 8 1/2 inches wide.
The matching antependium (pulpit hanging) is approximately 21 inches wide and 22 inches long/tall. 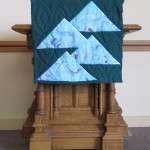 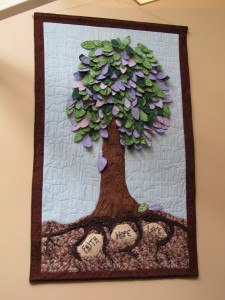 The ‘Tree of Life” banner was designed by Nora Berkhout.

The fabric artists who worked on the “Tree of Life” banner were
Mona Banek, Lesley Robinson, Carolyn Secret, Joyce Schellenberg,  Marcia Skaarup, Bill White and Nora Berkhout who met for sewing bees.
Lesley Robinson & Mona Banek did the final sewing and Marcia Skaarup did the quilting. 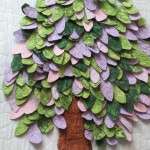 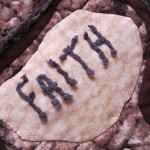 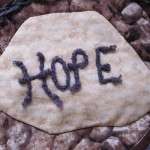 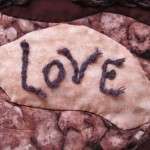