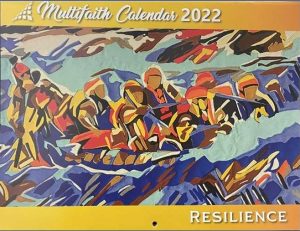 We  sell the Multifaith Calendar annually to support the work of RAFT (Refugees and Friends Together).

In the late 1970’s, Kamloops United Church formed a “Refugee Resettlement” group in response to the many refugees fleeing Viet Nam (known at the time as  “the Boat People”), and sponsored our first family.

Our next sponsorships were refugees from Guatemala, Nicaragua and Bosnia-Herzegovina.

Responding, in the late 1990s, to the huge numbers of refugees from Kosovo, the KUC Refugee Resettlement group was asked by the Canadian government to co-ordinate sponsorships in Kamloops for refugees from the former Yugoslavia.

We agreed, and individuals from the wider community, and other churches in Kamloops joined with us, sponsoring 50 refugees from Kosovo

and Albania.  As we worked together, this sponsoring group took on the name “Refugees and Friends Together”, “R.A.F.T.” for short, to more accurately reflect the diverse make-up of the group.

Since that time we continued to sponsor refugees, sponsoring people from Ethiopia, the Democratic Republic of the Congo, Colombia, Iraq and Iran.

With the public’s heightened awareness and interest in responding to the refugee crisis, we once again invited the wider community to become involved, to increase our sponsorship capacity by including more individuals & groups in this important humanitarian work.  In response to the Syrian crisis, RAFT held an information meeting in September 2015. During this meeting, the “KUC Refugee Resettlement Committee”, and R.A.F.T. (an acronym for “Refugees And Friends Together”, which is a blend of church and secular persons working together in support of refugees) provided information on what is involved in refugee sponsorship and how to become involved.  Nearly 100 people attended the meeting.  Many attendees filled out forms indicating how they would like to be involved.  As well, a number of people made financial donations and/or pledges towards refugee resettlement.

RAFT held an information meeting in May 2016 to update the public on refugee resettlement in Kamloops. “Thank you” was expressed to the many churches, organizations and individuals who have contributed to refugee sponsorship in our area.  The total number of Syrian refugees arriving in Canada from November 2015 to March 2, 2017 was 26,140 and 2,267 of these came to B.C. 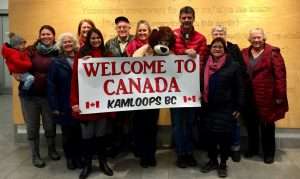 By the spring of 2016 we had five families arrive. The first was a family of 5, then two single brothers, then a single young man who came with no advance warning but was warmly welcomed all the same.  Three of these “families”, while sponsored by RAFT, were actively supported by the Kamloops Islamic Association.  The snow and cold weather were new experiences for everyone and great fun especially for the children.  Children were introduced to schooland some adults attended English classes at Kamloops Immigrant Services.   The following year,  saw the arrival of 2 more families plus one destined for Clearwater (who later moved to Kamloops).  Members of RAFT spend time with the families, introducing them to life in Canada, to our banking system; the bus system; shopping for groceries, etc. and doing mountains of paperwork;  Much of this work was supported by Arabic translators from within the community as well as students at TRU.   The Kamloops Islamic Association held a Welcome Party for the Newcomers which included a thank you certificate presentation to RAFT and Kamloops Immigrant Services.  It was a delightful evening with over 300 people present and much good food and camaraderie.    Later 3 more Syrian families were welcomed to Kamloops.

Our most recent sponsorship – the Syrian family of 3 (Mom and 2 daughters) – have moved to Montreal to
be with a family member there. They are happy there.

Covid 19 has had a major effect on the ability to apply for sponsorships and also the movement of refugees to their new
homes. As a consequence, RAFT has not had any arrivals in more than 2 years now. We also do not have any applications in the pipeline. We are eager to return to active sponsorship and hope with the reopening of the Blended Visa Office Referred program in the not too distant future, that we will be able to have a new family reasonably soon.  (2022)
We are also considering the possibility of sponsoring an Afghan family – as long as they are out of Afghanistan and in asylum elsewhere – and also that they meet the criteria the Gov’t. of Canada has set out. These are: Women Leaders; Human Rights advocates; Translators and others who worked directly with Canadian Forces; LGBTQ persons; and Journalists and those who assisted Canadian journalists.
There are new regulations concerning the fundraising for any sponsorship. It is now required that all the
funds for a particular sponsorship are raised BEFORE submitting the application to sponsor. Those funds
will be held in Trust by Kamloops United Church until the family arrives.
Therefore, RAFT is actively fundraising to facilitate our ability to sponsor.
RAFT continues fundraising to support ongoing refugee sponsorship.

If you wish to make a donation through this website, please click the DONATE NOW button on our home page and click on the selection bar for RAFT.  You will receive a receipt, via email shortly after you complete your donation, from “Canada Helps”.
You are also welcome to visit the Kamloops United Church office, at the corner of 4th Avenue and St. Paul street, and make your donation there.  You will receive a tax receipt for this donation, from the church at the end of the fiscal year.
Or, if you are interested in supporting R.A.F.T. financially or with your time, please phone 778-471-7631, or email <raft@kamloopsunited.ca> or visit the RAFT Facebook page on Facebook at RAFT Refugees And Friends Together.