Kamloops United Church is proud of our history of being among one of the first officially Affirming congregations in Canada; we have been since May 1996.

Nationally, as early as the 1970s, lesbian and gay church members began to form groups for mutual support. In 1980, a study was produced, In God’s Image…Male and Female : A Study on Human Sexuality that provided education on human sexuality, sexual orientation, and the ordination and commissioning of declared homosexual people. Over the next decade there were more groups formed, more study, and in 1988 General Council 32 declared that “all people, regardless of sexual orientation are declared welcome as full members, and …eligible for ordered ministry.”

A fledgling Affirm group was formed in 1982; in 1990 Affirm was invited into official dialogue with the United Church’s General Council Executive, and a year later the Affirming congregations’ network was established. In 1994 Affirm and Friends of Affirm merged to become Affirm United/S’affirmer Ensemble.

At Kamloops United, a parallel history was taking place. In the early eighties, Rev. Don Robertson invited a gay man and a lesbian to share their stories with a gathering of the KUC congregation. Over the next several years, issues of sexuality, homosexuality and homophobia were explored and discussed in meetings of various KUC Council committees. Our call to be an inclusive people was integrated into worship and, under the leadership of Rev. Allan Richards and Rev. Don Waldon, there were two congregational gatherings around the issue of inclusion and welcoming of gays and lesbians. There was overwhelming support for a vote taken regarding “being an Inclusive Congregation”.

In 1992, following a local UCC workshop on issues of human sexuality arising from the most recent UCC General Council, a group formed, calling themselves “Friends of Affirm”. A letter to the KUC Council, dated December 1992, and signed by Dency McCalla, asks that serious consideration be given to offering same gender covenanting services at KUC.

In early 1995 a Steering Committee was being formed, and in September the group was meeting frequently and had made the decision to join Affirm. That fall, a bulletin notice to the congregation stated, “… At KUC we have a Mission Statement, part of which states ‘to be among all people fostering loving relationships’. We need to address the reality of the situation and be more sharply aware that at every gathering homosexual people are present. They are unidentified and frightened to reveal their presence because of the hurt caused by the careless use of words and actions…Our hope is that KUC will indeed become a welcoming, affirming congregation for all people and thus help us to live out our Mission Statement, ‘To be among all people fostering loving relationships with God, with Jesus Christ and with each other’. Signed, the Steering Committee: Dency McCalla, Martha Ashbaugh, Patricia McColl, Jenny Carter, Betty DeBeck, Betty Tennant, Paul Newman, Gale Glover, Cheryl Lyall, Liz Barlow, Bev Knowles”. Between September of 1995 and March of 1996, the congregation had the opportunity to view several videos and participate in workshops and discussions.

By March 4, the Steering Committee was ready to take a motion to the Spring Congregational meeting: to become an Affirming Congregation, and to change our Mission Statement.  On May 12, 1996 the Annual General Meeting of KUC voted in favour of adding the following to our Mission Statement, in perpetuity. “Kamloops United Church welcomes and embraces all persons who seek to live faithfully, regardless of sexual orientation, age, gender, racial or ethnic background, and affirm that all are welcome to become full participants in the life, membership and leadership of this church.“

For over two decades Kamloops United Church has been officially a member of Affirm United.

So what does being Affirming mean?

Affirm United is a justice-oriented organization of people in the United Church that works for the full inclusion of people of all sexual orientations, and gender identities. The Affirming Ministries program is a network of congregations and ministries that declare themselves to be fully inclusive …and …each ministry is expected to take action.
KUC has an obligation to live out our commitment as an Affirming Ministry. Affirm United recommends the PIE principle (“public, intentional, explicit“): that we be PUBLIC, that people who come to KUC or hear about our ministry will know that we are an Affirming congregation. We should have our statements and Affirming symbols on our website, print material and signs. We must be INTENTIONAL…none of this good stuff happens by accident so we stay mindful of incorporating Affirming messages into our services, seeking partnerships with other organizations, and hosting studies and workshops. And we need to be EXPLICIT. It needs to be clear how we can be fully inclusive, moving beyond tolerance into celebration, and communicating all of this to our KUC community and to the broader public.

Being public, intentional and explicit about our commitment to being Affirming is a continuing process.

In June 2016 we were approached to accommodate the multi-faith vigil following the horrific Pulse nightclub shooting in Orlando, and we were honoured and humbled to be asked. On a Thursday evening our sanctuary was filled beyond capacity by a diverse group of Kamloops community members coming together in solidarity with the traumatized LGBTQ2S+ community. 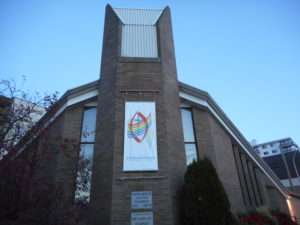 A banner adorned with the beautiful Affirm United symbol often hangs on the front corner of our building. A photo of that banner appeared in Kamloops This Week alongside a column about KUC and how we are Affirming. 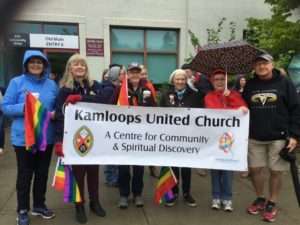 KUC folk have marched on campus with our banner in the Thompson Rivers University Student Union Pride parade, and participated at the “tabling” to engage with students and faculty of TRU.

In August of 2017, a large and colourful contingent of KUC people marched in the First Annual Kamloops Pride Parade, and were active in support of Kamloops Pride leading up to the event. (In the Pride events each of the following years, our KUC group has grown in size and enthusiasm!)

Also in 2017, allies from KUC and other churches gathered in the fall under the leadership of Allison Rennie to learn more about what it means to be Affirming, and about some of the cultural and national UCC history leading up to the present. Kamloops United Church continues to seek ways that we can live out our Affirming commitment.

KUC supported the founding of the Kamloops Pride Choir in 2018 with a grant from the United Church of Canada, and two of our musical directors have provided leadership.

Leading up to Pride Week in 2018, KUC turned their accessibility ramp at the front door into a permanent rainbow, and hosted an event with a Queer art show and parade poster making in the hall and sanctuary.

On September 30, 2018 our congregation dedicated a beautiful quilted banner of the Affirm United symbol, to be hung, in perpetuity, in our sanctuary. The banner’s placement is public and visible, it was placed with and to express intention, and is explicit in its message and meaning.

At the end of 2018, to prepare for a new annual event upcoming on March 14 – P.I.E. Day –  Kamloops United created a short video about why being Public, Intentional and Explicit matters.

The following March, KUC celebrated PIE day on Pi day with delicious pie! We hope to have this become one of our KUC traditions! 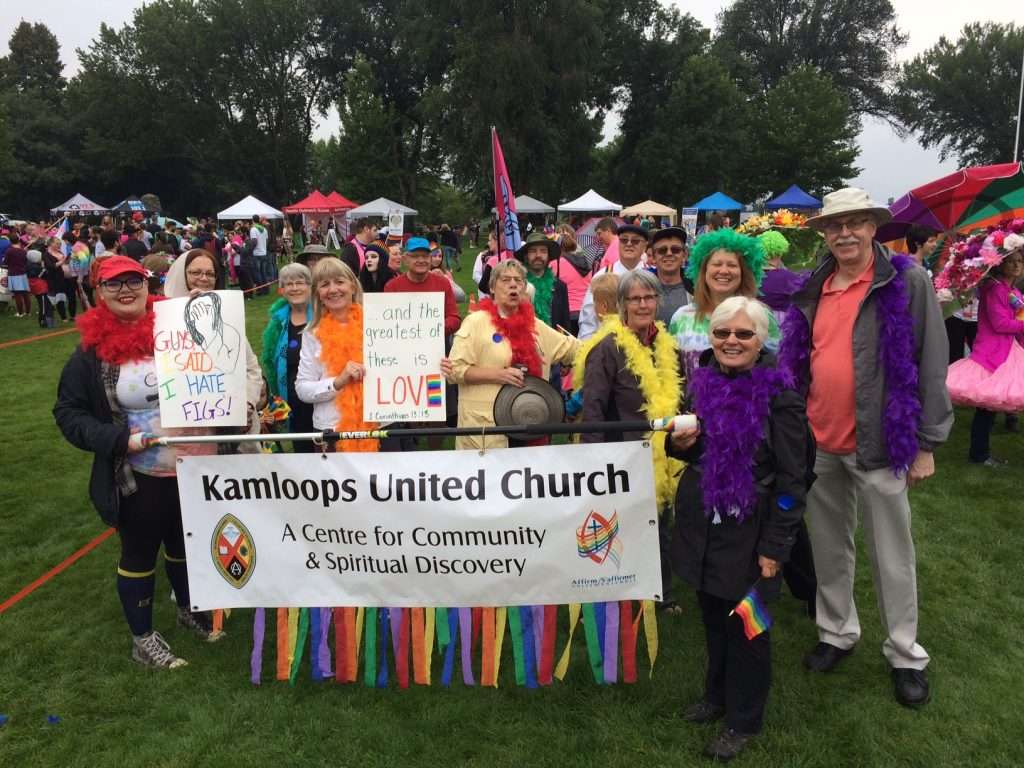