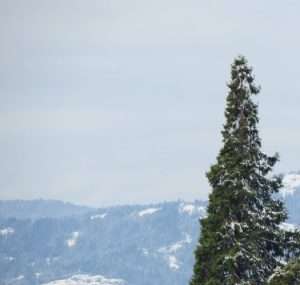 “As an Indigenous person, in the spirit of Reconciliation, I respectfully offer lyrics reflective of Wendat (Huron) culture.”  Dana Lynn Seaborn

We gather at midwinter dark to share this hallowed night.
Within our longhouse, warm and dry, the fire glows with light.
Our Elders sing a teaching song;
it fills the night that seems so long:
This is our sacred home, ‘neath heaven’s dome,
shining stars proclaim the dawn.

Sky Woman came down from above, but found no place to stand,
till Toad put mud on Turtle’s back, and that became the land.
Sky Woman died in giving birth;
her holy body fed the earth.
This is our sacred home, ‘neath heaven’s dome,
shining stars proclaim the dawn.

A valiant Little Turtle rode a cloud up to the sky;
she used the lightning to make fire, and made our Sun to shine.
He journeys ‘neath the world we see,
returns to make the shadows flee.
This is our sacred home, ‘neath heaven’s dome,
shining stars proclaim the dawn.

The Black Robes came from lands afar, and told us of a day
Judea had been colonized, and Rome must be obeyed.
A mother bore a child of light;
rejoicing filled the starlit night:
This is our sacred home, ‘neath heaven’s dome,
shining stars proclaim the dawn.

Rejoice! Have courage one and all! The stars shine overhead,
the same stars that shone down upon a baby’s humble bed.
The infant grew to be a man;
his words, like stars, light many lands.
This is our sacred home, ‘neath heaven’s dome,
shining stars proclaim the dawn.

During this time of Reconciliation, I’ve written new lyrics for “The Huron Carol”.  (“Huron” is a word which was used by Jesuit priests to describe the people who call themselves Wendat.)

The English lyrics were written by an Anglo-Canadian in 1926 to the tune of the French folk song, “A Young Maid”.  As a Métis woman who has lived in territory named for the Wendat, and studied traditional Wendat culture and history, I find those lyrics, written almost a hundred years ago, to be typical of their time in their contempt for, and appropriation of, Indigenous culture.  These English lyrics were written during a time when Indigenous people were viewed with what today would be called condescending, paternalistic racism.

The 1926 lyrics reference “Mighty Gitchi Manitou” and “sons of Manitou”.  Gitchi Manitou is often translated, “Great Spirit”, but it’s less “God-the-Father” and more, “Universal Energy”.  Having said that, the main problem with this lyric is that it’s the wrong language, and the wrong language family.  The Wendat speak an Iroquoian language; Gitchi Manitou is Cree, which is part of the Algonquian language group.  Evidently the lyricist didn’t understand that there are various First Nations in Canada, with different languages and cultures.

The lyric “kneel before the radiant Boy who brings you beauty, peace and joy” seems simply ironic.  Not long after the Jesuits came among them, the Wendat lost half of their people to smallpox.  The survivors were attacked by the neighbouring Iroquois, and many more died.  A number of the Wendat who remained sought refuge with the Jesuits, who, in exchange for shelter, required that they profess Christianity.  The few surviving Wendat were then forcibly removed from their lands, and relocated hundreds of miles away.

Rather than a pseudo “Indian” or colonist approach, I’ve tried to write lyrics that reflect the stories that the Wendat themselves would traditionally have been sharing during midwinter.  These are followed by two verses acknowledging the influence of Jesuit, Jean de Brébeuf.

I believe that this is a song that Euro-Canadians, as well as Indigenous Canadians, will enjoy singing.  They can learn about, and celebrate, Wendat culture.  They can research other Indigenous Canadian traditions to discover the ways in which their stories are similar, or different, from those of the Wendat.  If they are Christian, they can look for similarities between the Christian and Wendat stories.

Learning about, and respecting, each other’s culture is the first step to reconciliation.  These lyrics are offered free of charge to be used during church services, although I’d appreciate notification.  The lyrics may be offered for other non-profit use upon request.

Niw_Hk_M_Kanak
All My Relations,
D L Seaborn
—————————
Web editor’s note:  This Hymn is in Voices United, #71, titled ” ‘Twas in the Moon of Wintertime”
See The United Church of Canada post “Unwrapping ‘The Huron’ Carol” here.
Image credit: Dana Lynn Seaborn from their website.