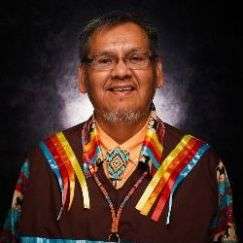 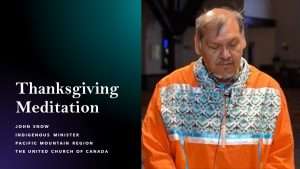 This was produced by Kamloops United Church and is being shared to the rest of the Region.

John Snow, Jr. is a direct descendant of Treaty 7 signatories and a member of the Stoney Tribe; he is a sun-dancer and pipe-holder in the Nakoda Tradition. John was educated in Canada, the United States and London, England. He holds an M.A. in Political Science in Public Policy, Law and Administration from the University of Calgary. John is a seasoned speaker, instructor and negotiator for technical oil and gas. He has worked with provincial and federal governments to advise on policy, guided by the Treaties, the TRC, and UNDRIP. John has been able to provide insight on Indigenous ways and history by giving presentations and instructing Indigenous courses for youth to post-graduate, and for the United Church and the Morley Ecumenical Conference. John has served the United Church of Canada as a student minister in Maskwacis, as a member of the Permanent Committee on Finance, Chinook Winds Regional Executive, and the National Indigenous Council. John is a graduate the Sandy Saulteaux Spiritual Center Indigenous Ministry Program and holds a Master of Divinity from Vancouver School of Theology.