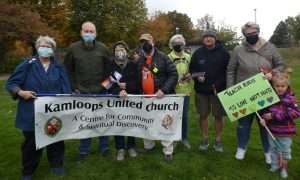 A rally and pride parade were held in downtown Kamloops to show support for the local trans community.  A group of supporters from KUC attended.
See the two “albums” below: one of the gathering at the Rotary bandshell and one of the parade.
The “Peace for Pride” gathering in Riverside Park on Saturday raised over a thousand dollars for queer safe spaces in Kamloops, said Tré Rhiness, organizer of the event.                           Click to see CASTANET news coverage