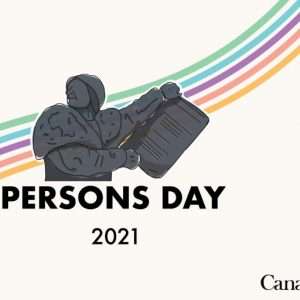 October 18 is Persons Day in Canada!

It marks the day in 1929 when the historic decision to include women in the legal definition of “persons” was handed down by Canada’s highest court of appeal. This gave some women the right to be appointed to the Senate of Canada and paved the way for women’s increased participation in public and political life. Though this decision did not include all women, such as Indigenous women and women of Asian heritage and descent, it did mark critical progress in the advancement of gender equality in Canada.     Read about the history (click here).

Image:  Government of Canada (Persons Day webpage)|
2021 Persons Day image description – The statue of Nellie McClung is part of the We Are Persons! monument on Parliament Hill that commemorates the Famous Five’s accomplishments and celebrates their victory of the Persons Case. The Famous Five, Louise McKinney, Irene Parlby, Emily Murphy, Henrietta Muir Edwards, and Nellie McClung launched the legal challenge that would mark a turning point for equality rights in Canada.
The statue of Nellie McClung holds a page from a newspaper, which declares that “Women are Persons!”. It was the first sculpture to be placed on Parliament Hill depicting women other than Queen Victoria and Queen Elizabeth ll.