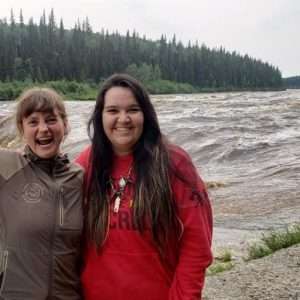 Many KUC folk will remember or know Shay Paul who has coordinated numerous Indigenous art shows, projects and dialogue with us at KUC. Here she tells her story of travelling to the North West Territories and engaging with Indigenous people alongside another masters student.   Shay is daughter to “our” Bill Paul, KUC custodian and care-taker.

Shay Paul has just recently returned from her second food-sovereignty research trip north of the 60th parallel. She had spent the months of June and July in Fort Providence, NWT working alongside another masters student, Emalee. The pair engaged in many community events and workshops, often working alongside the local youth center to deliver activities. From spending days with youth, to renovating and repairing gardening structures, the days were never dull. Shay learned so much by working side-by-side with community members to develop garden plots and to have conversations about food procurement – both traditional and modern.

While Shay and Emalee were in Fort Providences, they got to witness the Assembly of Chiefs and the 100th Anniversary of the signing of Treaty 11. There was many experiences during this trip that could be considered a once-in-a-lifetime opportunity. Shay thinks back fondly on the lessons she learned and the people she met while there, which have inspired her upon returning to Kamloops.