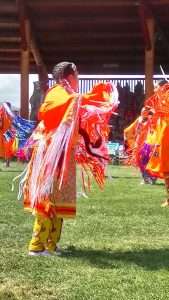 KUC is commemorating Red Dress Day this Sunday May 2nd, and the Pacific Mountain Region Council will be holding a Town Hall meeting on May 5th to discuss the issue.  https://pacificmountain.ca/red-dress-day-townhall/

The REDress Project helps to raise awareness about the more than 1,200 documented missing and murdered Indigenous women and girls across Canada.

The project was inspired by Winnipeg artist Jaime Black, a multidisciplinary Metis artist of mixed Anishinaabe and Finnish decent.  It is a visual art installation project first displayed at the University of Winnipeg in March, 2011 and has since been displayed in public spaces throughout Canada and the United States to draw attention to the gendered and racialized nature of violent crimes against Indigenous women.  It was displayed at TRU in October, 2011.

Jaime Black’s art seeks to evoke a presence through the marking of absence.  In the installations red dresses are hung to symbolise the lives of the women.  She says  “I hope that … I’m allowing people to critically think about the issue…it’s amazing how…powerful it is to see these dresses just hanging there, and when you walk by them it feels like you are walking by someone, but no one is in them.  It really works as a kind of visceral reminder of these women.”

The project was designed as an aesthetic response to this critical national issue.  The artist chose red because, she explained, it is the representation of the woman of the red nation, and life blood; the woman’s ability to give life.  Some Indigenous groups believe red is the only colour that the Spirits can see.

Jaime Black also hopes the project will allow people to see that there is support for the issue.   “I think that education is the key to help people understand and have more sensitivity around the issue and maybe in that way it will change something…..a lot of people do want to support the issue.  It’s just that they don’t know enough about it yet.”

More information about the REDress project can be found at https://www.jaimeblackartist.com/exhibitions.