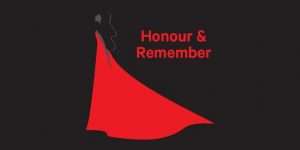 This Sunday we are observing “Red Dress Sunday”. It is an opportunity to hold in our minds and in our hearts indigenous women who have been murdered.

The following is an excerpt from a chapter in the book, “The Ball is in Y(our) Court written by Sara Doesburg and Jaslyne Golaz and reproduced under creative commons licence.

The exact number of Indigenous women who have been murdered or are missing in Canada is unknown, however, it is estimated to be over 4000 women with half of the murder cases remaining unsolved (Moeke-Pickering et al., 2018). Canadian Indigenous women are 4.5 times more likely to be murdered than non-Indigenous women. They make up 25% of national female homicide victims, despite representing only 4% of the population (Saramo, 2016). Not only is the prevalence of murdered Indigenous women disproportionately high, the rate of charges against the perpetrators in these crimes is about 30% lower than it is for non-Indigenous victims. Chances are you have not heard these statistics before and were unaware this was even an issue in Canada. And, if like us, you are recently learning about this, you are probably just as outraged as we are.

We must ask ourselves several questions in order to understand how we have come to this point. Firstly, what has led to this becoming an issue in the first place? Why is MMIW such a silent issue within Canada? And finally, what role does law enforcement have in the low conviction rates and the disproportionately high number of unsolved cases of MMIW?

May 5 is Red Dress Day in Canada, and Canadians are encouraged to wear red in order to draw attention to the more than 1000 missing and murdered indigenous women in Canada. Red Dresses stem from a project by Metis artist Jaime Black who sought to collect a red dress for each woman or girl murdered for an art installation in Winnipeg. The dresses went on to be displayed across Canada. The colour was chosen because red is the only colour spirits can see and is a way of calling the spirits of missing and murdered women and girls back to their loved ones.

Click here for a copy of: Reclaiming Power and Place: The Final Report of the National Inquiry into Missing and Murdered Indigenous Women and Girls

Please join us as we observe Red Dress Sunday.