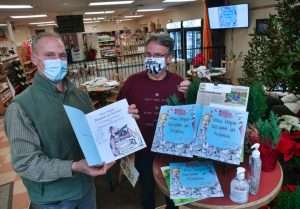 Michael Weddel (left) has How Hope Became An Activist signed by Kamloops author George Johnson during the Nov. 19 book launch at the Smorgasbord Deli in downtown Kamloops.
Photograph By DAVE EAGLES/KTW

After 10 years and about 20 tales, the Thompson Rivers University professor is excited to say he is now a published author of a children’s picture book.

Johnson, who has called Kamloops home for 30 years, recently held a book launch for his first published children’s book — How Hope Became An Activist — which is based on his own experiences in activism and includes a main character named after his great-niece. Illustrations were done by Danielle Grandi.

“She’s just a feisty little kid and she’s thrilled that I’ve used her name in this book,” Johnson said.

In the book, Hope discovers how to make positive change on issues from fair trade clothes to refugee aid.

Hope’s introduction to activism begins when she signs up for a play depicting sweatshop labour. That inspires her to host an anti-fashion show demonstrating the conditions under which their clothes are made. Hope then gets involved with a refugee resettlement organization.

Both the play and fashion show came from Johnson’s real-world experiences, while the refugee program is based on the local Refugees and Friends Together (RAFT) program.

Johnson said he hopes his book will spark a conversation between parents and their children, who will be encouraged to start asking questions, given the current state of the world with regards to issues such as climate change, racism and the COVID-19 pandemic.

“You can’t just sit on the sidelines anymore. Everybody’s got to participate and help out,” Johnson said.

Johnson starting writing children’s stories a decade ago for his own kids because some topics weren’t covered in the classic children’s books he would read to them.

“One of the topics that was dear to me was activism and I didn’t see a lot about that in picture books,” Johnson said, citing Dr. Seuss’s The Lorax as one of the few.

Getting this first picture book published has been years in the making for Johnson.

“I’m thrilled. It has been a long journey with many frustrations,” he said, noting the industry is competitive and he has had publishers fall through in the past while pursuing the venture on the side while teaching.

This past summer, however, he broke through, landing a deal with British outlet Dixi Publishing.

“They publish books on progressive topics, so they were completely in line with the way I was thinking and enthusiastic right form the beginning,” Johnson said.

Two more books in the series are also due to be published: How Avery Became an Environmentalist and How Ben Became a Food Bank Volunteer.

Both of those books also draw from real-world experience. The Ben character is named after Johnson’s son, who would volunteer with his grandmother at the food bank, while the fictional Avery character builds bee-houses, which Johnson did for the local chapter of the United Church to raise money for charity.

Johnson’s first foray into activism came when he was in the fifth grade and his class got involved in cleaning up Grindstone Creek in Waterdown, Ont..

From Ontario, Johnson came to Kamloops in 1991 out of grad school and began working at the then-Cariboo College. He is a professor and chair of the English and Modern Languages Department at TRU, chairs the Global Community Action Committee at Kamloops United Church and, most recently, co-led the Blue Dot campaign to make Kamloops an environmentally sustainable community. In 2019, he received the Kamloops Y Peace Medal for his social justice work and writing.

How Hope Became An Activist is available in Kamloops at The Smorgasbord Deli (Victoria Street and Seventh Avenue), The Art We Are (246 Victoria St.), The Book Place (248 Third Ave.) and Chapters (Hillside Drive and Pacific Way).

The book is also available online with free shipping. A dollar from every book sold in Kamloops will support Fairtrade Canada.