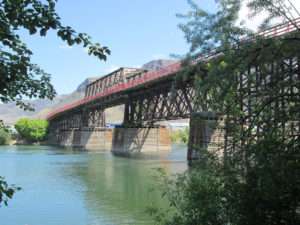 History of Bridges in Kamloops.

Colleen Stainton retired to her hometown of Kamloops in 2006 after a career in which she became a Professor of Nursing. She was one of the first group of nurses to attain a PhD in Nursing! Once settled, she became involved with the Communities in Bloom who adopted the entrance to the Red Bridge as a Bicentennial Project.

Colleen became very interested in the Red Bridge and used her research skills on the history of it. She became fascinated and continued to study the history of all bridges in Kamloops.

Please join us May 8th at 2 PM for an enjoyable presentation and tea.