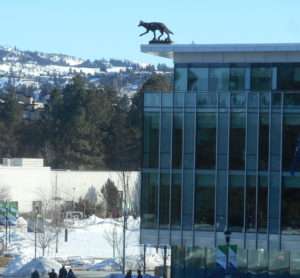 The windows of the Terrace room in the Campus Activity Centre at TRU let in welcome sunshine and the promise of spring as we gathered in a circle to honour Richard Wagamese, in anticipation of the release of the movie Indian Horse, based on Richard’s book. Jeffery McNeil-Seymour led  the welcome and the honour songs with the drum of his father as the smudge wafted it’s cleansing medicine around us. We were privileged to hear from Edna Manitowabi, the Anishanabe elder who portrayed the grandmother in the film.

Edna shared her own story of being a six year old girl lifted from her mother’s arms and bussed to a residential school. The traumas of that school experience followed Edna always, but her description of how she found her way and her hopes for the future moved us all. We also heard from Christine, one of the movie’s producers; she talked about how difficult it was to get backing for the movie, until the TRC report was released. Suddenly there was interest in doing a movie about residential schools. It was good to hear Christine share some of the feedback on the movie. Folks that she described as “hardened Canadians” were reporting that the movie had changed them to the core. Proceeds of the movie will go towards Reconciliation work, and a project challenging us all to work for Reconciliation, “#Next 150” is underway on the movie’s website.http://www.indianhorse.ca/