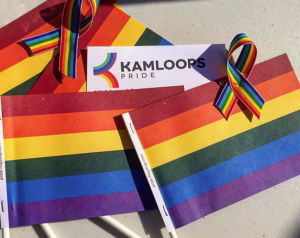 Kamloops Pride President Kirstin McLaughlin says while specific details aren’t ready to be announced yet, the planning committee has been focused on making small tweaks and adding more events in the week leading up to the Pride Parade and Festival.

“We have been seeking constructive feedback on the planning and execution of the inaugural parade in order to make this August’s event even better,” said McLaughlin.

“We don’t want to reinvent the wheel here. We want to ensure we’re building a sustainable event that the entire community can be proud of.”

New this year will be an increased festival element to the celebrations in Riverside Park.

“We’re hoping to create new and additional reasons for people to come to and stay in the park before and after the parade,” said McLaughlin.

“Whether that’s increased food truck offerings, children’s activities or all of the above is something we’re still working out.”

The organization is currently seeking sponsorship and donations to support the event. Partnerships built last year were integral to the success of the first-ever downtown Pride Parade.

“We were blown away by the support of the community last year both financially and through in-kind donations, volunteerism and good old community building,” McLaughlin said. “It was an event that members of the community supported in ways both big and small and we’re ecstatic to be building those relationships again for a second time.