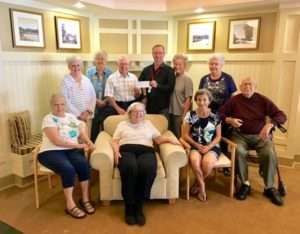 Berwick residents, staff raise more than $7,000 for wildfire relief (Image and Story From Kamloops This Week)

Residents of a Kamloops retirement community have raised more than $7,000 to support those impacted by this year’s wildfires.

Residents presented a cheque for $7,333 to the Canadian Red Cross intended to go toward both immediate relief and long-term recovery for those impacted by this year’s B.C. wildfires.