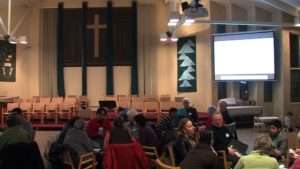 KAMLOOPS — In the wake of the horrific attack at a mosque in Quebec City that killed six people, many Canadians are calling for more tolerance and love towards muslims — and people of all different faiths.

In Kamloops, at the local United Church, members of various Christian groups have been meeting with the Muslim community to learn more about Islam. It’s all part of a series named ‘Jesus Fatwah.’

“I thought we’d offer this Jesus Fatwah series to help Christians understand more about Islam and meet some folks who are of the Muslim faith,” says facilitator of the series Dawne Taylor.

In small groups, these members of the Kamloops Christian and Muslim communities are having open discussions about Islam — all in the name of dispelling certain myths about that religion.

Some says these discussion come at the perfect time — albeit an unfortunate time — in light of the events in Quebec.

“They are very important,” says participant Judy Barber. “I’ve told quite a few people about them, and they’ve said ‘it’s about time this is happening and it should be happening more often with more people.'”

Another participant, Abdul-Raheem Marican, thinks “it’s a good idea to get people aware of Islam and their belief, so that you won’t be causing friction.”

Margaret Sutherland, who’s attended her first session on Tuesday night, says it’s important to learn about any misconceptions there is out there about Muslims.

“I want to better understand what it’s about,” she says. “You get so many stories and so many negative things, and in the little bits I’ve read it was a very positive, peaceful group of people.”

Every session, people watch a series of videos on Islam and talk about them, and out of the discussions, many are finding there are more similarities than differences between Christianity and Islam.

“I think this is a perfect opportunity for Christians and Muslims to get to know each other,” says Sommiya Hasan. “We have so much in common. Why should we discuss our differences? Lets talk about our commonalities and lets be friends.”

The hope is these discussions will help one group, one person at a time better understand the muslim faith, so we can all move forward as one.