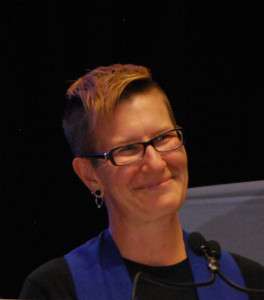 The Rev. Jordan Cantwell, the Moderator-elect of The United Church of Canada, exuded passion and energy as she spoke with media following her election.

“My understanding of ministry and my role as a minister is to accompany people,” said Cantwell on Aug. 13. “The stories of our faith teach us that God is with us on the journey. Wherever we are, always God was in that.

“We are fundamentally a people of hope,” said Cantwell. “Our story is one of hope. We have something to offer the world.

“We as a church need to tap into the hope that is at the core of our faith. It’s easy to get lost in the business and in the fear [of change].”

She said that while the General Council decisions about restructuring appear inwardly focused, the courage and mutual trust that are being exercised can be carried into ministry in the world.

Cantwell, 48, said the point of being a gospel people is the need to share the gospel and to recognize it when and where it is bubbling up in the world.

The Moderator-elect admitted that she has a capacity to hear and respect a diversity of voices. She has a passion for justice and for ecumenism and a deep commitment for reconciliation with Indigenous and non-Indigenous people. “It is critical and urgent for Canadians and churches,” said Cantwell. “It’s a timely one for the church right now.”

She is working on becoming fluently bilingual. “Our francophone churches bring to us a history, a perspective, our anglophone churches don’t know,” said Cantwell.

“We need our francophone voices, our Indigenous voices, our young voices, our old voices,” said Cantwell, noting that the United Church is anglo-centric, predominantly White, middle aged, and older.

Cantwell is New York born, and was raised on the Canadian prairies from the age of two.

After working at the Centre for Christian Studies in Winnipeg, which trains diaconal ministers, in 2006 she moved to Saskatoon to study for her Master of Divinity (M.Div.) at St. Andrew’s College, Saskatoon.

She sought ordained ministry, with an M.Div. as part of her formation. She recognized that she was well-grounded in justice work, prophetic ministry, and community development work, but said that she wanted further education in the sacraments and in the pastoral and priestly sides of ministry.

Before and after ordination, she has served the Delisle-Vanscoy United Church, 43 kilometres southwest of Saskatoon, for seven years.

She exuberantly sings the praises of the congregation that she serves three-quarter time. The congregation has picked up a number of the tasks of ministry so she can focus almost half of her time on youth ministry. Its members support and affirm the benefit of her work in the wider United Church.

Her journey to being elected Moderator has been one of discernment for her and for the General Council that elected her.

“This is what the church has discerned, so I’m honoured, and I’m humbled,” said Cantwell.

She was surprised by some of the people who asked her to run. “So I had to take seriously what they were asking,” she said.

Cantwell said she needs to be anchored, so she has developed the spiritual practice of daily centring prayer.

(Website editor’s note:  Here is a photo of Rev. Cantwell surrounded by prayers of United Church congregations and ministries, in the form of prayer fish, including KUC’s rainbow origami prayer fish in the lower left corner of the photo.)