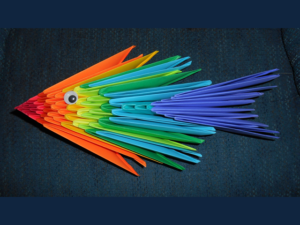 We have received an invitation to offer our prayers in a very tangible way for GC* 42……to create a prayer fish to be sent to Corner Brook, Nfld. ahead of time.  The prayer fish will be displayed in the meeting area and, much like a prayer shawl, will “wrap” the General Council gathering in the prayers of United Church folk from across the country.

We have decided to write our prayers on coloured pieces of paper to fold into an origami rainbow trout.  This rainbow coloured origami ‘trout’ is especially appropriate as we are an affirming congregation (the rainbow part), and we are sending it from British Columbia (rainbow trout)!

If you would like to have your prayer for GC42 added into this origami prayer fish, please email it to the church office  or drop it off there.   It will certainly be included in our prayer fish. Deadline: August 1st.

*General Council (the national gathering of our church.  The August gathering is the 42nd general council of the United Church of Canada)

(The photo displays the sample origami fish made by Patric M.)

Donna and Ross write their prayers for GC42.

Sheri and Colleen offer their prayers.

Kathy (who will be attending General Council in Cornerbrook, Newfoundland) and Carole express their prayers.

Iris and Judy adding their prayers

The prayers are added to the offering plates, ready to be folded into our rainbow fish.