It is said that the Achilles heel of any commission is the follow-up – there is such a temptation to say, “Well now, that issue has been dealt with!” and to let the report, along with all its recommendations, languish on some dusty shelf; nothing really changes; people forget. Just check out the Royal Commission on Aboriginal Peoples whose 4000-page report was released in 1996, and see how little has actually been acted upon. This is not to be cynical, but rather to present a call to action. Change must happen!

Structural change is absolutely necessary, and the government, church, and civil society organizations need to make strong, concerted efforts to establish new laws, agreements, resolution of treaties and land claims, funding regulations, and restitution. I am glad that the United Church has made a strong commitment to continue the work of reconciliation and right relations. There will be a proposal coming to General Council concerning this; and Dr. Marie Wilson, Truth and Reconciliation Commissioner, along with Indigenous leaders, will offer a challenge at the General Council. The United Church has already committed to helping pull together a meeting in September of all “the parties” involved in the TRC, to ensure that the recommendations don’t just disappear, like yesterday’s news. For more details about what the church will be doing please refer to the most recent posting of Living into Right Relations.

I also know, though, that change needs to happen “on the ground,” when individuals come to know and respect each other, and experience what right relations might actually look like. So let me share with you three stories from my time at the closing TRC event in Ottawa.

At the end of the Tuesday session, when the recommendations of the Commission were presented and talked about; when we were all slowly departing, filled with a mixture of tears for the past and hope for the future – I had a conversation with a United Church woman, whom I did not know, but who filled my heart with joy. For a variety of reasons she had not been able to attend previous TRC events, but she was determined to be present for this historic occasion. That day, she had sat beside a First Nations woman who was a survivor of the Indian Residential Schools. They got to talking. The United Church woman knew the facts; she had seen some of the videos, but she acknowledged to her neighbour that she had never actually heard a personal story, face to face. The Aboriginal woman took a deep breath, and offered to share her story with her, not at that moment, when time was already stretched, and the setting was so public, but later. The two women exchanged phone numbers and promised each other that they would get together in the coming weeks.

The woman I spoke to recognized that she was being offered an incredible gift. She also knew that she would be changed by hearing this story, and that she would then carry a new responsibility – not only to honour and treasure the story in her heart, but also to be a witness to what she had heard, and to be committed to help bring about change. As she spoke to me, she was weeping.

But there were other encounters, with a different dynamic. For instance, I attended the closing ceremony at Rideau Hall, the Governor General’s residence, and at the end of the speeches, we all went out into the gardens, each of us now partnered with a child, so that together we could plant “Heart Flowers.” The children had created “hearts” coloured with words and pictures of hope and encouragement, which had then been attached to thin stakes, which we were to “plant” in the lawn, thus lining the driveway with symbols marking the way to a new future.

My partner, a 10 year old, handed me my heart flower, along with a postcard that said, “Dear Survivor, I am so incredibly sorry for what you have been through. With time, love, and truth I hope that we can move towards a brighter future – together.” And then he smiled and asked, “What nation are you from?” I shared that, in fact, I wasn’t an Aboriginal person, but rather, someone from the United Church, who was here to say how sorry I was for all that had happened at Residential Schools, to apologize and to promise that I and all the people of my church would do everything we could to help make things different and better. There was a long silence. And then he said, “I don’t think I can forgive the people who did all those things. You took my grandfather away and put him in one of those schools.” I responded by again saying how sorry I was; that he was right, terrible things had happened; and I understood how many people were still very hurt and angry. He looked at me and said, “Someone brought an apology to my nation in Saskatchewan, and we burned it.” It was a sobering moment… hurt, apology, anger, hope, commitment… all intermingled. We stuck our heart flowers into the lawn; we said good-bye… and walked away into an unknown future, recognizing how challenging and difficult the journey would be… and how necessary and important. 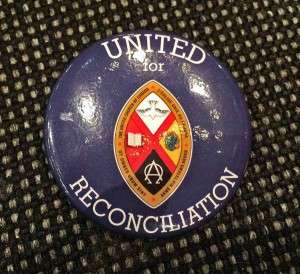 I think we all know that there is no quick fix, but it’s clear that actions must accompany words of apology, although what that will look like isn’t always clear. Glebe-St. James United Church (in the Ottawa area) has, like many congregations, adopted the practice of beginning worship and various church meetings with an acknowledgement that they were gathering on the unceded territory of, in their case, the Algonquin people. At the last congregational annual general meeting, someone raised a question: “We keep saying that we are on unceded territory – so, are we going to do anything about this?” There was a long pause as people thought about the implications of what was being asked. And then came a tentative suggestion from another corner of the room, that perhaps the congregation might consider committing part of their budget to various projects that support the journey towards healing, reconciliation, and right relations. Another long pause. And then someone else spoke up, wondering about the congregation making a pledge that 10 percent of their budget would be dedicated to this work, which was followed by a serious discussion about financial constraints and justice, and limited resources and commitment, leading to “How can we afford this?” and “How can we not do this?” Back and forth, a time of faithful and serious discernment, until the mind of the meeting became clear and the people of this community of faith made a decision  –  10 percent it would be (starting in 2016, a delay that would allow them to do the necessary financial work.) The money could be used in two ways: given to First Nations organizations or projects in the Ottawa area that are helping to meet the needs of urban Aboriginals; or, used to educate church people (in Glebe-St. James, in the presbytery or Conference, or in the ecumenical community.)

Justice Sinclair, in delivering the TRC report, said “As commissioners, we have described for you a mountain. We have shown you the path to the top. We call upon you to do the climbing.” This is now an ongoing story for all Canadians: injustice and repentance; hurt and opportunity; hope and challenge… and, eventually, reconciliation, and right relations.